Chios (modern Greek: Χίος) is an island in the north-east of the Aegean Sea. It is considered the birthplace of Homer, the famous poet author of the Iliad and the Odyssey. The traces found on the site of Emporios show that men have been present on this island since the Neolithic period (6000-5000 BC).

Chios has, since antiquity, a great maritime and commercial force. Amphorae from the island have been found as far as Russia. It still remains a powerful region in this area, most Greek shipowners’ families coming from this island.

Another richness of the island of Chios comes from the Mastic or mastiha trade, present in the village of Mastihohoria.

Mastiha is a natural gum derived from the resin of mastichodentrou – mastiha tree, which has many virtues. The resin flows out of the tree, then is dried in the sun and cleaned by hand, resulting in off-white nuggets.

Antiseptic, antibacterial, it is also widely used for oral hygiene and relieving stomach upset. It is found in many forms, liquor, pastries such as loukoum or shortbreads, sparkling water, ice cream … Its production is very controlled and only the Chios Mastiha Chewers Association manages the production of Mastiha.

Finally, the island is also a great producer of citrus (it is very famous for tangerines and lemons), olive oil, figs and wine.

Capital of Greece, with the Parthenon as a symbol, Athens is a city with a great history and a cultural centre but still alive !

Corinthia, located north of the Peloponnese with Corinth as its capital, is well known for its canal, its raisins, its history but also its wine! 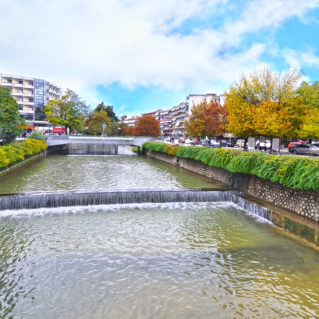 Trikala may be the most innovative city in Greece today. At the same time, it remains known for its high quality agricultural products !