Trikala (Τρίκαλα in greek) is a city of Thessaly with a long history and today is one of the most innovative and environmentally conscious cities in Greece. For example, most residents use bicycles, there are driverless buses, ATM which delivers certificates, free wireless network in various parts of the city and many other measures taken related to the recycling, environment and transformation of Trikala into a “smart city”.

Geographically, the city is crossed by the river Litheos, a tributary of the Pinios, which divides the city in two. The Central Bridge, built in 1886 by French engineers, connects the main square with the pedestrian street of Asklipiou. Trikala is located near Meteora, Kalampaka and southern Pindos where Elati, Pertouli, Pyli and Neraidochori are located.

Historically, the wider area of ​​Trikala has been inhabited since prehistoric times with evidences in the cave of Theopetra dating from 49,000 BC, while in Megalo Kefalovryso Neolithic settlements have been discovered from 6,000 BC. The city of Trikala is built in the ancient city of Trikka or Trikki which was founded around 3,000 BC. and took its name from the nymph Trikki, daughter of the river god Peneus. In ancient Triki Asclepius was born who was also king of the city. In the city there was one of the largest Asclepieia, the sanatoriums of antiquity. The city led by Mahaonas and Podaleirios, the sons of Asclepius, participated in the Trojan War with thirty ships.

The geographer Strabo describes that ancient Triki was the center of Estiaiotida, a state that occupied approximately the same area as the present prefecture of Trikala. In 480 BC. was occupied by the Persians, while a few years later it joined the monetary union of Thessaly. In 352 BC. Triki united with Macedonia under the leadership of Philip II and in 168 BC. conquered by the Romans. Later, it became part of the Byzantine Empire, where it met all the invaders such as the Normans (1081) and the Franks (1204). At the beginning of the 12th century, the Byzantine princess Anna Komnene presents the city for the first time under the name of Trikala in her work Alexiada. In 1395 the Ottomans conquered Trikala, which became known for woolen textiles and leather products. Finally, in 1898 they were incorporated into the greek state.

In 1906, the first Agricultural Cooperative in Greece was founded in Trikala, while they actively participated in the struggle of the farmers against the Thessalian landlords.

They played an important role in the resistance during the occupation as the ELAS (Greek’s People Liberation Army) general Stefanos Sarafis came from there, while the head of Aris Velouchiotis was exposed in public. It was liberated from the Nazi occupation in 1944.

In Trikala today there are various sights and points of interest that you can visit. One of the most important is the Byzantine Castle built by Justinian in the 6th century AD and had a triple wall, was rebuilt by the Ottomans in the 17th century and added a clock on a tower, which was replaced in 1936. The clock is accessible and offers views of the entire city.

Also important is the Asclepieion of ancient Triki. A large part of it is located probably below the district of Varousi and at present Roman baths and mosaics have been discovered from Hellenistic and Roman times. Another interesting place is the Osman Shah Mosque built in the 16th century which is a monument protected by UNESCO.

The old town of Trikala, consisting of the districts of Varousi and Old Manavika, has a special charm with mansions and houses with special architecture, built between the 17th and 19th century that testify to economic development thanks to the flourishing of handicrafts and trade.

The hill of Profitis Ilias full of greenery, overlooking the city, hosts besides the homonymous church and the Environmental Education Center in Dapia.

Another point of interest is the Matsopoulos Mill built in 1884 and today it is an industrial park and cultural center. It functions as a museum and can be visited all year round. During the Christmas period, the Christmas park “Mill of the Elves” is organized in Mylos.

Trikala, like the whole regional unit, is known for its high quality agricultural products. They have a long livestock tradition with the very famous Trikala sausage, they are known for dairy products such as feta and kasseri cheese, halva, wildflowers honey, black truffle honey, loukoum with fir honey, vegetables and fruit (tomatoes, watermelons), wines, tsipouro.

The Greek island of Lefkada, with its magnificent white chalk cliffs lined with sumptuous beaches, is rich in culture and history !

Crete is, in many ways, a remarkable island. Immense by its size, it is also by its millennial culture and its products of the soil ! 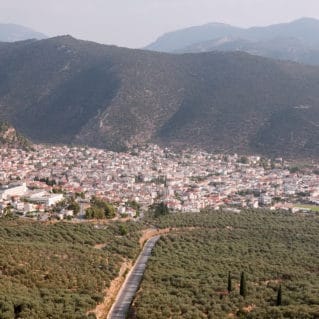 Amfissa is one of the most important and historical cities of Central Greece. Surrounded by mountains and olive trees, it has a special beauty !